Those darn taxes (or not). 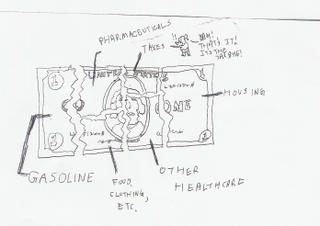 Here is the Republican response to these reasons your money seems to never be enough.

Housing: Yeah, we are in a housing boom. Great news for developers, real estate agents and people who need to sell a house. If you are lucky enough to work in the construction agency, that is pretty good news for you too. But if you are trying to save the money for a starter home, or paying ever escalating rent (especially in a place like Phoenix or LA) then, well, just keep in mind that millions of people around the world live in a box, and be happy with what you have (unless you are also homeless, in which case, you can get affordable housing by committing a felony.)

Gasoline: Well, you elected two guys from Big Oil as President and Vice President. And under their leadership, they have gotten to drill in environmentally sensitive offshore areas in the Gulf and California, gotten permission to drill in ANWR, and are now selling their crude oil for upwards of $60 a barrel. They can claim it has to do with refinery capacity, but enough oil is still being refined to get everywhere, and besides, they said that ten years ago, which is plenty of time to build more refineries, if that was anything more than an excuse. Gasoline crisis, what gasoline crisis? If you are a major investor in Big Oil, this is a great time to be getting up in the morning. (come now, you didn't really think that the President and the Veep would forget who their friends are in order to hold gas prices down for the rest of us, do you?)

Pharmaceuticals: These keep rising and rising and rising. But never fear, the Republicans have an answer: Beginning in 2008, you will need a passport to get in from Canada or Mexico (and this is NOT about catching terrorists, who always have their paperwork in order, or undocumented immigrants, who sneak across). So now, they will crack down on people who object to the drug companies right to selectively gouge Americans by buying their prescriptions more cheaply elsewhere. And, all those trillions of dollars the Pharmaceutical companies will be getting from the Federal Government courtesy of the prescription drug bill passed last year by Congress, may not hold prices down but you can bet it will buy enough TV ad time to stop anyone who wants to reign in drug prices.

Other Health Care costs: Republicans always claim that we have the best healthcare system in the world. That may or may not be true (the bottom line is that people in other industrialized countries that have socialized medicine live longer, have lower infant mortality, a healthier population and also spend less on healthcare), but even if it is, the Republican argument is essentially this: We have a 'Cadillac' healthcare system that is the best in the world and we would be foolish to change. But: They forget to point out that this means that you have no other option than to PAY 'Cadillac' prices, even if you are on a 'Chevrolet' budget. There is no 'Chevrolet' option, you HAVE to pay for a Cadillac. Of course, if you don't want to go broke paying for treatment if you have cancer or a serious injury, you always have the right to drop dead (well, maybe not-- with their opposition to voluntary euthanasia for the terminally ill, it is clear that they want to make sure the hospital can squeeze every cent they can out of your first).

Food, clothing, etc.: Republicans can save you lots of money here, by cutting farm subsidies, and shipping your manufacturing job to Asia. Then, someone will make your new pair of jeans for 15 cents in a sweatshop somewhere, then send it to the United States where you can buy it at Wal-Mart from someone who is on food stamps because their job at Wal-Mart doesn't pay enough to feed a family.

Taxes: Have remained steady or dropped for the past decade, resulting in a record budget deficit (money that will need to be paid back later). Of course, facts (record highs for each of the things on this list, except for food and clothing) don't matter to Republicans who are the reason your dollar won't stretch as far, they are still in a state of denial, singing the familiar refrain that it's those doggone taxes.
Posted by Eli Blake at 10:36 PM