A 'patriot,' but to what country?

Joe Wilson a 'patriot?' Maybe, but not to any cause I want to be a part of. As Joe Conason point out today, it seems that Mr. Wilson's image consultant is none other than Richard Quinn, who also directs other Republican campaigns in South Carolina.

In his spare time, Mr. Quinn publishes a periodical called the 'Southern Partisan.' Mainly, the magazine (besides advocating for the display of the Confederate flag, extolling the virtues of the Old South and trashing Martin Luther King) hates the President with a vengeance. No, I don't mean President Obama, I mean the sixteenth President, Abraham Lincoln. Here is a t-shirt that Quinn has pushed now for some years: 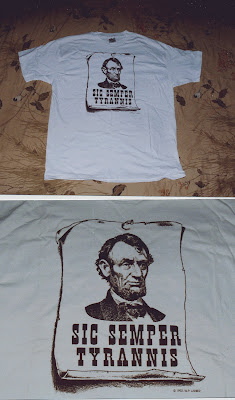 (in case you forgot your history, 'sic semper tyrannis,' meaning 'and thus to tyrants' is what John Wilkes Booth cried moments after firing a bullet point blank into the back of President Lincoln's head.)

Well, I guess it's true then that Joe Wilson and his backers are 'patriots.' They just won't make it clear which country they are patriots too. After all, there are some people in the old South who to this day will remind you that the Confederacy never signed an official surrender document.
Posted by Eli Blake at 8:29 PM

These neo-confederate dunderheads still think they are fighting the Civil War.

Even Scarlet and Rhett didn't want the South to rise again. Do any of these wing nuts have any idea the toll the Civil War took on the South?

It's still the one region that can't provide basic services and education to its people. What is so attractive about Third World conditions to Republicans? They don't seem to aspire to anything better.

Dumb as dirt and dirt cheap?

If the federal government doesn't back off, there will be another civil war.

And as far as Congressman Wilson, he was right. Obama DID lie ("If you like your plan, you can keep it.")