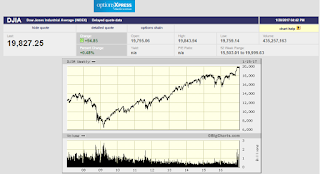 As Donald Trump begins his term in office, it is fair to hold President Obama to the same standard. The metrics that were available on that date were the stock market close, the euro exchange rate (in that if it costs more dollars to buy a euro that is both a sign of a lack of faith in the U.S. economy and an indication that it will be more expensive for Americans to either travel or buy goods that are produced outside the country,) net job creation, price of crude oil and national debt.  Later the January unemployment rate was also added as a metric.

*-- NOTE regarding the national debt :  Generally, the deficit (and corresponding increase in the national debt) for each fiscal year is assigned to the previous President. For example, had 2009 been an ordinary year, then FY 2009 budget (which covers from midyear 2008 to midyear 2009) was passed in early 2008 (though in fact it was a series of continuing resolutions that effectively continued spending levels set in past years) and signed by President Bush.  HOWEVER, as we know, FY 2009 was anything but an ordinary fiscal year.  The actual budget was dwarfed by two massive spending packages: TARP ($700 billion, which was passed and signed by President Bush but was spent equally by Presidents Bush and Obama) and the Stimulus ($890 billion, which was signed and spent exclusively during the Obama administration.)   What this means is that you will see estimates of the share of the national debt run up under each President all over the board, especially as given by people who have an agenda and are being intellectually dishonest.  To ensure consistency, in 2009 and again with this post, I am using a National Debt clock (which to a degree I don't like because it mindlessly keeps track of spending regardless of the source,  but at least it is a consistent way of measuring using the same metric.)  I am not sure which National Debt clock I used in 2009 but they are pretty much all the same.  The one that is being used as a source for this post is http://www.nationaldebtclocks.org/debtclock/unitedstates .

The Euro exchange rate today is that $1.07 will buy you one euro.  While this is still worse than it was when Clinton left office in 2001, it is much better than the $1.32 it was eight years ago.  To be sure, part of that is due to the collapse of the European economy, in which the dollar was seen as a safer currency.  BUT that is exactly the point-- the U.S. has been navigating in exactly the same world economic straits as anyone else.  Yet the Obama administration has steered our economy into a path of increasing prosperity that has eluded other countries.  Not only Europe, but also Brazil, China, Japan and other nations have all experienced economic pain.  Considering how difficult a course this has been, it is clear that under President Obama's leadership, the U.S. has come through the Great Recession in significantly better shape than most other nations.

The price today for March delivery of one barrel of West Texas crude is $53.24.  Probably no single commodity is more important in terms of affordability for the economy than the price of crude oil (which is used to produce gasoline, jet fuel, heating oil, fertilizer and plastics, among other products.)  Among its many uses, gasoline is the single biggest product and the one that most people recognize as either being a strain on their budget or not.

The growth in the price of crude oil overall was slightly faster than the net growth from start to finish of the Bush administration.  However, as was noted in the post eight years ago, the price of oil underwent a large degree of volatility during the Bush administration, rising to over $150.00/barrel in June 2008.  It was at times volatile as well during the Obama administration but never reached the degree of boom and bust that the price went through under Bush.    It is true that defenders of oil production will say (and correctly) that the expansion of hydraulic fracturing (a.k.a. 'fracking,') a procedure opposed by many on the left, has increased the supply of crude oil and helped keep the price down.   They will also point out that the President banned fracking on federal lands.  And on both of these points they are absolutely right.  However, the other side of the coin is that the President did not ban fracking elsewhere (though he could have, as some state governments have done) and further it is true that while fracking increased the supply, there are two sides to a supply/demand equation and on the other side, the President decreased demand.  He did this by sharply increasing CAFE fuel efficiency standards on automobiles (such that the new vehicles on the road today have much better fuel mileage than they did a few years ago;  as an example, I have both a 2010 and a 2016 Nissan Versa, and for the same make and model of vehicle, my gas mileage is over 10 mpg higher in the newer car than in the older one.) Also, when he included 'cash-for-clunkers' in the Stimulus package, President Obama specifically made sure that the old inefficient vehicles that were being traded in had their engines destroyed so that they could not be resold on the aftermarket.  This had the net effect of taking fuel wasting vehicles off the road and replacing them with vehicles that used less fuel. SO while it is certainly true that there were reasons beyond anything the President did that helped keep crude oil prices reasonable, it is ALSO true that he did do some things that also helped keep them low.

The national debt is today $19,968,000,000,000 (19.968 trillion dollars.) See the note earlier in this post about sourcing and consistency regarding obtaining a fixed figure for the national debt.  It is certainly true that this rounds to $20.0 trillion, and further it is also true that the increase of $8.2 trillion during the Obama administration is more than not only the dollar increase during the Bush administration but in fact than the dollar increase during ANY previous administration.  Again though, this does not in a snapshot give us the whole story.  Yes, during his first year in office President Obama did spend a lot of money between TARP II, the Stimulus and other measures designed to help the economy. Regardless of what others might say in hindsight, this was absolutely necessary spending;  the risk of a complete economic collapse was very real and in fact, many economists argued that the Stimulus was too small.  Luckily the nation did not suffer a complete collapse and the fire was put out.  In fact, since the disaster in 2008 (which the cost of TARP and the Stimulus hit in fiscal 2009) the deficit has gone down to the point where it is now less than half of what it was then. Obviously a half trillion dollar deficit is still a whole lot of money but it's still important to know that the direction of the Obama deficit has been to generally get less over time.   The fact that it is not even lower is a reflection of the fact that there are still tax cuts in place that reduce revenue even faster than one could reduce spending. For example, President Obama extended the original Bush tax cuts until 2012;  then during the 'fiscal cliff' deal only the highest rate was raised;  most of the Bush tax cuts remained in place.

Beyond this, it is also worth noting that there is one commercial that you didn't hear during this campaign.  That is the claim that President Obama had 'added more to the national debt than every other President combined.'  This claim, which has been standard fare during any campaign in which it applies, was certainly used (and correctly, as Bush had doubled the debt) in the 2008 campaign, to try and tar John McCain by tying him to Bush on the debt.   But while the Trump campaign had a lot of negative advertising they used against Hillary Clinton and tying her to Obama, doubling the debt was not one of them.  That's because it's not actually true.  The debt under Obama grew by 69%;  This is slower than the rate of growth under most previous administrations, and as shown before, was growing by a lesser amount later in the term.

I won't claim then that the Obama record on the deficit is a smashing success, because obviously it's not.  But it's also not the catastrophic failure that some would have you believe.  It will be interesting to see what Trump makes of the debt, given his pledge to push for massive tax cuts that will certainly blow up the deficit, at least in the short term and quite possibly in the long term (keeping in mind that the 2001-2012 tax cuts produced anything but great prosperity during the time when they were in effect.)

Jobs and unemployment numbers were delayed until the January jobs report from the Bureau of Labor Statistics and show a final unemployment rate of 4.8 % (down from 7.8% in January 2009.)  The jobs creation numbers (from February 2009 through January 2017; historical data here) show  11,501,000 net jobs created.   Yes, if I were going to wave the flag unabashedly for Obama then I would begin counting in March 2010 (and give Bush 'credit' for 4,320 million net jobs lost during the first thirteen months of Obama's Presidency and point out that Obama has created nearly 16 million jobs since then) but fair is fair -- I used the same metric for Bush (February 2001-January 2009) so Obama is stuck with those numbers.  The only adjustments may be minor as it is routine for the Bureau of Labor Statistics to make minor adjustments in the two preceding months (which would be December and January) in subsequent jobs reports as more data becomes available;  If the adjustments are positive then Obama will be able to claim 11.5 million net jobs created. The February 2017 jobs report will be the first one credited to Trump,
Posted by Eli Blake at 8:11 PM

Email ThisBlogThis!Share to TwitterShare to FacebookShare to Pinterest
Labels: #Obamarecord

Hello, I came to this 2017 article after reading up on your john mccain kemper marley mob ties, which was an excellent article, this article, not so much.

Saddamn Hussein is probably not as bad as you and many others make him out to be. In fact, you really have no place to judge the man if you never lived in Iraq when he was in charge.

Further, your comment about him making life difficult for surrounding countries carries no proof with it because during the time that he was in charge of Iraq, Muammar Gaddafi was busy building the Great Man Made River irrigation project. If Saddam was such a problem for Libya that project might have never been completed.

Something else that I suggest you look into regarding Iraq is the stargate and the fact that Iraq is where Babylon was located, and Sumeria. If you have ever looked into the Anunnaki then a light bulb might be going on for you right about now. The Bush admin are in the old bloodline and are connected to the queen windsor family (saxe conburg gotha windsor mountbatton), when they realized that Saddam was sitting on a stargate that's when they whipped up 9-11 to give them an excuse to invade so they could go take control of it. And of course taking control of the land and all it's resources was part of that deal.

As for Afghanistan, I've heard many people over the last year say that many cities in the US are battling heroin addiction. Where do you think that heroin comes from?