The Road to Ruin is Paton with intentions (not all of them good.) 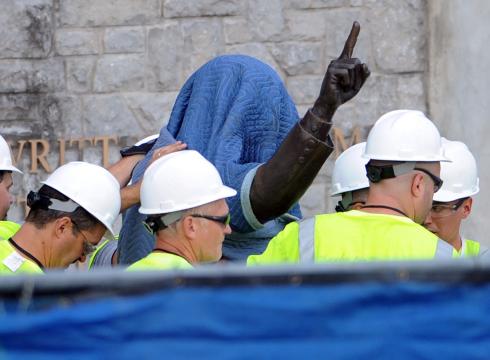 Joe Paterno had the highest of standards, and paradoxically at the same time the lowest of standards. Paterno, who coached the Nittany Lions as an assistant coach beginning in 1950 and became head coach in 1966 and coached until he was fired in late 2011, was undeniably 'old-school.' An Ivy League product (from Brown,) "Joe Pa" made very sure his athletes graduated and got the academic help they needed to remain in school. Nowadays this would be less remarkable since the NCAA has made academic success a part of what is needed for football players and other athletes to remain eligible, but he did so from the day he began coaching, when there was little or no concern about academics in college football. "Saint Joe" literally had a halo painted over his image in a mural on the Penn State campus. For that matter, when the NCAA caught up with where Paterno had been for years and began to focus on academics and other rules, Paterno's program was able to avoid a single NCAA infraction. The idea of using bribery or other illegal methods to induce players to play for him was unthinkable. Besides academic success, Paterno preached lifelong character, and his players as well as many others upheld him and his unassuming, humble nature as a model of character.

For Paterno to be guilty of covering up such an awful crime as child rape was unthinkable. Except that it's true, spelled out right there in the Freeh report.

In contemplating how this could happen, I keep coming back to Paterno's age (he was 85 when he was fired, and died not long after.) Now, don't get me wrong. I'm 49 and in a few weeks when I turn fifty, I do plan to join AARP. One reason why is that AARP has a long history of fighting against 'ageism,' the term for discrimination against older people in the workplace and elsewhere. But to get to the root of ageism, we need to examine both the myths and the realities of age, and discuss a concern that is at the heart of ageism but is not often discussed because to do so is sometimes difficult.

This concern is simply put, that older workers may be obsolete. I know, you’re thinking this is a post about obsolete job skills. NO, IT IS NOT!! We all know that as the workplace is modernized, all workers of any age must update their career skills to adjust to new technology, innovations and other changes that go along with any job. And Paterno did so. Penn State has over the past two decades (since Joe Pa became eligible for Social Security) been a college behemoth. In every aspect of the game Penn State was an elite football program, often appearing in the top ten in recent years and winning three Big Ten championships after joining the league in 1993, most recently in 2008. Obviously he was still up to running a top level football program.

But it’s a more sensitive job issue that ‘obsolete job skills’ is sometimes used as a code word for. It is obsolete cultural skills.

Some years ago I was on an interview committee for a teaching position. One of the candidates was an elderly gentleman who had some teaching experience, though it was decades old. During the interview, he referred to female students as ‘co-eds.’ This is a term that hasn’t been in wide use since at least the 1970’s, and this and other answers led the committee to question whether he might unintentionally say something that would offend someone. Language is one aspect of cultural skills. The terms we use to describe people or groups of people change. For example, when I was growing up in the 1960’s, I first learned the term, ‘negro’ as a word for black people. However, today the term would be considered so out of date that it would be close to racist, and should never be used.

Returning to Joe Pa, he may have done a good job of adjusting to a more pass-oriented, faster paced offense or to new NCAA rules on recruiting, but he did a poor job of adjusting to a new world. Consider the world he began coaching in, in 1950. Surely child sexual abuse happened, probably at least as often as it does now. But it was never talked about. If something was said about it, most people at the time would (wrongly) assume it was likely a single (or even several) instances of easily correctable misbehavior, and a talk with the offender would have been good enough (with little or no thought given to the victim.) Whether Joe Pa ever had such a talk with Sandusky we will probably never know. One of them is dead, and the other will spend the rest of his life in prison and what he says from now on probably has no credibility at all. But whether he did or not, we now know that child molesters are never ‘cured’ (certainly not by a quick chat or word of warning.) And the crime itself has come to be taken much more seriously. In the 1950’s, very rarely would anyone be prosecuted for the rape of a child, unless perhaps the parents of the victim pressed charges (though the victim would often be too ashamed to acknowledge this in the first place.) People like Jerry Sandusky could count on that, and then he took advantage of troubled kids, who often did not have parents who would stand up for them to begin with.

This is not in any way to excuse Paterno. It is instead to point out that for older workers (whether they remain at their jobs or start new ones) the culture around them is changing. If you want to work until you are 85, as Joe Pa did, that’s great. I commend it. BUT, you have to do more than learn to use the newest computer program or new way to fill out a form. You have to keep up with the world, and adjust your thinking. And when you do, you have to act on it.

I believe that unspoken concerns about cultural obsolescence are at least as big a factor in the decision to pass over older workers as concerns about obsolete job skills. And until we can have an honest discussion about these concerns, we won’t really be able to make the job path smoother for older workers, even those who have a mind as sharp as a tack and who have kept up with every new technological development that comes down the pike.
Posted by Eli Blake at 1:21 PM 2 comments: